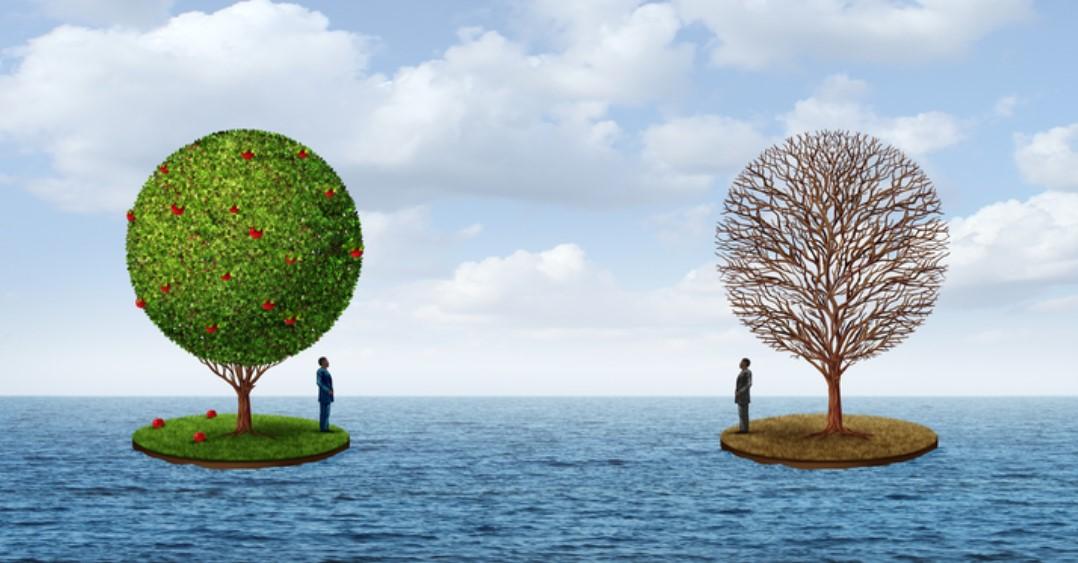 “Every change in the money relation alters … the conditions of the individual members of society. Some become richer, some poorer.” – Mises, Human Action, p. 414.

New money enters the economy at a particular point. It does not enter in the form of a proportional and simultaneous increase in everybody’s incomes. This means that there are uneven effects of monetary expansion, including exacerbated income and wealth inequality. When we trace the consequences of monetary expansion, we notice that it creates winners and losers as resources are shifted toward the first receivers and spenders of new money.

This idea is an old one. It goes back to Richard Cantillon, who in the mid-eighteenth century outlined the step-by-step process that new money works its way into an economy, causing some prices and incomes to rise before others. Rothbard summarized these “Cantillon effects” in his history of economic thought text:

In short, the early receivers of the new money will increase spending according to their preferences, raising prices in these goods, at the expense of a lower standard of living among the late receivers of the new money, or among those on fixed incomes who don’t receive the new money at all. Furthermore, relative prices will be changed in the course of the general price rise, since the increased spending is “directed more or less to certain kinds of products or merchandise according to the idea of those who acquire the money, [and] market prices will rise more for certain things than for others…”. Moreover, the overall price rise will not necessarily be proportionate to the increase in the supply of money. Specifically, since those who receive new money will scarcely do so in the same proportion as their previous cash balances, their demands, and hence prices, will not all rise to the same degree. Thus, “in England the price of Meat might be tripled while the price of Corn rises no more than a fourth.”

The Gini ratio, one of the more popular measures of income inequality, showcases the effects of an unrestrained central bank. A ratio closer to one indicates more income inequality; a ratio of zero means complete income equality. The graph below shows that the trend in inequality measured by the Gini ratio changed when the US completely went off the gold standard. Since 1971, the central bank has not been constrained by physical gold at all.

How New Money Is Created

In our modern fractional reserve banking system with an active central bank and profligate federal government, monetary inflation is a given. In the US, money originates as bank reserves created by the Federal Reserve to pay for US government debt or other assets from commercial banks. Commercial banks can then use these reserves as a basis for multiplying deposits in the form of extending new loans.

It is worth taking a moment to compare this to a commodity money system, perhaps with full reserve banking. New money must be produced at a cost and it is subject to the profit and loss test. The money supply can only grow when the money costs of producing money are less than the amount of money that can be produced. In the case of gold, the cost of mining, refining, and minting gold must be less than the discounted value of gold money produced for new gold to enter the money supply. The same economic threshold applies to any money that is not fiat.

Since it is trivial to add zeroes to fiat paper money (consider the Zimbabwean $100 trillion note pictured below) or to electronic bank accounts, there is no limit to the “profitability” of governments creating more fiat money or banks issuing fiduciary media (loans extended beyond reserves).

Once a dollar is created, somebody gets to use it first. When, for example, the Fed buys government bonds from a bank, the bank can now increase their lending due to those additional reserves. Banks lend in a variety of ways, including to each other and to the government. But once it is done bouncing around and between the banking system and large financial firms, the new money ends up in the hands of businesses and consumers. The FRED graph below shows the total amount of loans to consumers and businesses from commercial banks.

Consider, though, what the new money has done even before it reaches a consumer or entrepreneur. It has been used to buy assets that will provide potentially long-lasting streams of income for large financial institutions. We should not be surprised, then, by the insidious “financialization” of the economy, in which the size and scope of the financial industry expands. In 2020, the finance, insurance, and real estate (FIRE) sector reached over 21 percent of gross output (and 8.7 percent of GDP) according to the Bureau of Economic Analysis. Over the past few decades, we have also seen an increasing variety of complex financial assets, some of which are derivatives with multiple layers of performance based on performance based on performance of some deep underlying real asset.

Once the new money finds its way into the hands of regular private citizens, however, they get a chance to increase their demands for goods and services before everybody else. This includes durable consumer goods, capital goods, financial assets, etc. The prices of these goods begin to rise relative to other prices due to the artificially increased demand.

After the first group spends the money, there is a new group of people holding the new money—the people who sold to the first spenders. The new spending of the first group has turned into new, higher incomes for the second group. This second group now gets a chance to increase their demand for goods, but they will face slightly higher prices. The prices are higher because the first group had to bid their purchases away from those who would have bought it if there had not been an expansion of the money supply.

As the third, fourth, fifth, etc. groups spend their new incomes, prices continue to rise unevenly. Relative prices and the distribution of incomes change. The early receivers and spenders of the new money acquire resources that they otherwise would not have been able to acquire.

At the end of this chain, we have the last receivers of the new money. Their incomes rise after everybody else’s (or never, as Rothbard mentioned). It is worse than just a delay, however, because this group has been paying the higher prices from everybody else’s spending spree.

Beyond productive capital goods like tools and machines, consider also that stock prices and the prices of durable goods like houses and land will increase. If the first few groups of spenders acquire these first, they can merely wait for the later spenders to bid the prices of these goods up even further.

Income and wealth inequality is a natural feature of an unhampered market economy. Land, labor, and capital are heterogeneous, so incomes will vary according to the varied productivities of these inputs. Also, consumer demands change constantly, and entrepreneurial anticipations of those demands are anything but consistent even if they are striving for profits and avoiding losses. The economizing process of the market via profit and loss, however, ensures that resources are not systematically wasted and that consumer wants and needs are met to the fullest extent possible.

These inequalities are natural and healthy. If, for example, the government gives me money (after taking a cut) from somebody who has a higher income than me, then the allocation of efforts and resources will be altered such that consumer demands are not met as well as they would have absent the income redistribution.

Monetary expansion increases and exacerbates income and wealth inequality in a permanent way, however. We have seen that incomes rise disproportionately, such that some people’s incomes increase before others. We have also seen a clear movement of real wealth toward the first spenders since they are able to successfully bid resources to themselves from others.

The increase in inequality is not self-reversing. This is because the winners of the Cantillon effect game accumulate assets that appreciate due to the inflation or assets that augment their own productivity (consider an early spender who buys a tractor that increases his farm’s yield). These gains make it easier for them to make more investments in the future. The wealth redistribution is a permanent one with continuing effects on income inequality.

Future monetary expansion will multiply these effects—inflation favors those who own real assets. The inevitable result is the emergence of economic classes and the political and social conflict that may entail. The Cantillon effect losers may become envious of the seemingly unearned riches of the Cantillon effect winners, and since the Cantillon effect mechanism is difficult to see, the perpetrators—the government, the central bank, and issuers of fiduciary media – are likely to escape criticism, just like a run-of-the-mill counterfeiter who never gets caught.

The persistence and aggravation of the economic inequality caused by Cantillon effects also benefits those who can gain political points by appearing to stand up for “the little guy.” The same people like to blame free market capitalism for the heightened income and wealth inequality we see today, but we have seen that it is state intervention that exacerbates inequality. They also like to use the term “trickle down” economics as a discrediting label for policies that would get us closer to a healthy and growing market economy. But there is nothing more “trickle down” than government money printing from on high.